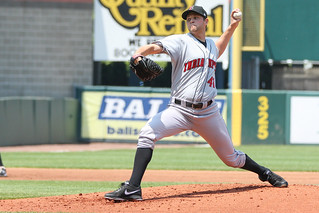 Each year, Major League Baseball holds a draft during the Winter Meetings in December. Players eligible for the draft were all signed when they were 19 or older and have played baseball professionally for four years. All players on a team’s 40-man roster, are deemed as “protected” and are therefore ineligible to be drafted. Teams draft in reverse order of the regular season standings. There is both a Major League and Minor League phase of the draft.

The Philadelphia Phillies made two selections today as part of the Major League portion of the 2014 MLB Rule V Draft, selecting utility player Odubel Herrera from the Texas Rangers and left-handed pitcher Andy Oliver from the Pittsburgh Pirates.

Herrera, 23 prior to the 2015 season, split time between A+ Myrtle Beach and AA Frisco for the Rangers. In 545 plate appearances, Herrera batted .315 with a .383 on-base percentage. While he lacks power, Herrera has enough speed to steal a few bases when he does get on base. A native of Venezuela, Herrera has a shot to play multiple positions for the Phillies, having played shortstop, second base, and all across the outfield in his 6-year minor league career.

Oliver is a 27 year old lefty who has both experience at the Major League and Minor League level. The former 2nd round pick by the Detroit Tigers in the 2009 draft started his career as a starting pitcher. Control was always the issue for Oliver. He was traded in December of 2012 to the Pittsburgh Pirates where he was used as a starter initially, before transitioning to a full-time relief role  in 2014. Oliver saw success out of the pen pitching for AAA Indianapolis, carrying a 2.53 ERA in 64 innings pitched. He also boasted an 85 to 47 strikeout to walk ratio. Oliver figures to get a shot in spring training to make the team out of the pen, likely replacing Antonio Bastardo, who was traded yesterday.

Born and raised in Central PA, but have been a Philly area resident since 2008. Greatest sports memory: Working for the Phillies and being there for the World Series Championship in 2008.