The Phillies were coming into the series off a walk-off win and the 1st game of this one against the New York Mets started out as a pitcher’s duel, as a David Wright, homer, Odubel Herrera knocking in Freddy Galvis, and an RBI double by the White Hot Lucas Duda, was all either team could muster through 6. In the 8th though, a recurring theme was developed in the key of B2B, and Mets won it going away, 5-2.

The next night was more like the Washington Natinals series 1st two games, and was never close as the Mets hit 6 Bombs, 2 off of starter Vince Velasquez. I will spare us all w/ the gory details and just say when the smoke cleared the final was 11-1.

The Phillies looked to at least duplicate the opening home series, by bouncing back and winnig the last game of the series, after being blown out the game before. Jeremy Hellickson, personally needed to bounce back from one of those DC blowouts, though he beat the Mets in NYC 5-2, 4/10/16. Tonight they would have to beat Bartolo Colon, against whom they have had trouble in the past. Even though he got the L the last time out against the Phillies, it was only 1-0, a Ryan Howard shot.

Pete Mackanin went all Tony LaRussa putting the pitcher in the 8 hole to try to get some offense going. 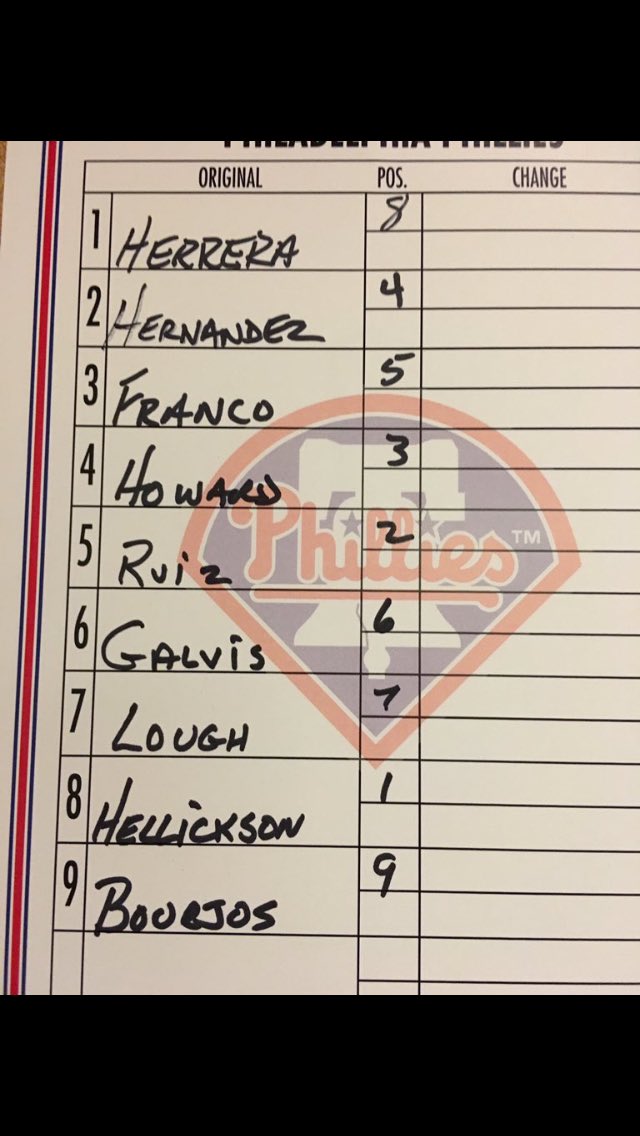 The Mets got on the board 1st in the top of the 2nd on a double by the Duda, a single by Neil Walker, and then another double – that was 1st called a HR which then became an automatic double via fan interference – which scored a run but saved 2 more. Another one crossed the plate though, on a WP by Hellickson.

The Phils did bounce back when Galvis tied it @ 2 w/ a Long Fly to LCF that just carried and carried, scoring Carlos Ruiz who had singled, in the bottom of the frame. Hellickson followed w/ a tough, 2 hit SDI.

A Sac fly by recently promoted David Lough scored Howard who led off w/ a walk, moved over by a Chooch single, and Galvis beating out a dp ball put one more on Colon’s line, and gave the Phils their 1st lead of the series.

But no SDI this time for Jeremy as for the 3rd night in a row though the Mets went b2b, this time Yeonis Cespedes and Duda hit no doubt shots, to put the Mets back up 4-3. Another hit and Hellickson was gone w/ Hector Neris relieving w/ no IR_S, so Jeremy’s line ends up 4.1 in, 10h, 4R all earned, 1bb, 6 k’s. Neris really had his splitter working for 6 k’s through 2.2 innings, keeping the Phils in the game.

Meanwhile Colon pretty much cruised through the next couple finally leaving after 6, giving up the 3 runs, all earned, on 4 hits, one BB, 4 k’s.

In the 7th Lough reached on a 1 out double, and Peter Bourjos knocked him in w/ a single to shallow RF as Lough was on his horse all the way w/ 2 outs, to tie this one up again.

Dalier Hinojosa picked up right where Neris left off striking out 2 more Metropolitans for a 1-2-3 SDI, and another in the 8th for 3 thru 1.2. Jeanmar Gomez added 2 more in his 2 innings of work.

The Mets were keeping the Phils in the game going 2-14 w/RISP thru 11, mostly living on the long ball to score.

Unfortunately statistically, if not numerically, the Phils were just as bad at 1-6 until Galvis got into scoring position w/ a 1 out double in the 12th. An IBB to Lough and then a WP by the Mets 6th pitcher, Hansel Robels, moved both up, which set the stage for Peter Bourjos to slap an 0-2 pitch for a single to Wright to end the BALLGame !
Put another one in the Win Column for Jeanmar Gomez & the Phightin’ Phils! who for the 2nd series in a row avoided a sweep with an extra inning walk-off.

The Phillies Pitchers were leading all of MLB w/ strikeouts w/ 147 coming into tonight, leading Boston by 14, they got 17 more tonight, the 6 from Hellickson and 11 by Neris, Hinojosa, and Gomez combined.

Antonio Bastardo was very effective w/ 2 innings of one hit, no run ball in his return to CBP in a Mets uni.

Carlos Riuz is starting to see the ball a bit better it seems, 3 hits tonight, coming off the 1-3, w/ a HR against Washington last w/e.

It took 16 games but the Phillies finally collected 10 hits w/ that last one by Burjos.

A well deserved day off tomorrow and then the Phils hit the road for 3 in Milwaukee and then 3 in DC.